How COVID Changed the "AI vs. People" Debate in Leasing 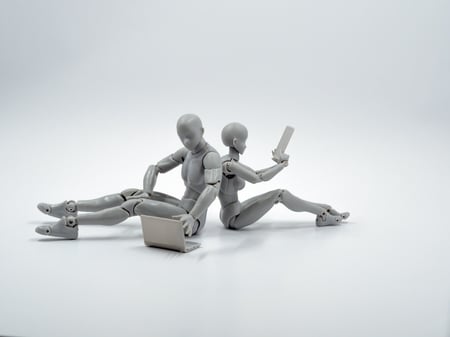 Of the many things that changed in multifamily over the past year, one of the most intriguing is the way that operators are thinking about the role of artificial intelligence (AI) in leasing. A little over a year ago, we predicted (in our 20 for '20 white paper) that 2020 would be a break-out year for AI leasing agents. The progress made by some companies, the availability of multiple viable solutions, and the relatively low friction and low-risk implementation made this an attractive solution to the perennial problem of lead handling.

A year later, however, the 20 senior leaders we interviewed for this year's white paper told a slightly different story. Half told us that their AI leasing initiatives had sped up in 2020, with the remainder either slowing down or not changing. The technology gained ground, but perhaps not as quickly as we expected, or compared to other leasing innovations (self-show, for example).

Our 20 conversations with senior multifamily leaders suggested a shift in the way companies are viewing this technology. In particular, two things stood out, which I will describe below.

What A Change In Terminology Tells Us

A year ago, a major 20 for '20 finding was about "fully automated leasing." Early adopters were bullish about the potential of AI and other technologies (smart home technology, self-show) to drive efficiencies, including breaking the 1:100 (associates to units) paradigm. Reading through the 20 sets of responses, we noticed that leaders are now talking about it differently.

Terms like "self-serve" or "contactless leasing" were ubiquitous in the responses, while "automation" was largely absent. There were a couple of reasons for this. First and most obvious, the pandemic forced a rapid and dramatic change in the leasing process. The experience of having to enable self-show provided a different set of data points for operators on why a self-service model is both desirable and achievable. The move toward self-service appears now to be a higher priority than automation, per se.

If there was evidence a year ago of a strong desire to automate jobs out of multifamily organizations, it appears to have cooled. A small minority of interviewees spoke of a radically different staffing model for leasing. All were larger owner-operators (which is unsurprising as they have greater flexibility to pool associates between properties), and all spoke of it as a vision that would take a couple of years to become a reality.

Another observation that seems highly relevant to staffing models is the role that people played in a changing leasing environment. After the initial months of lockdown, several leaders reported that prospect behavior began to change in the summer. Those companies offering a choice of touring options found practically all prospects chose either virtual or self-guided tours during the early months of lockdown.

However, as some restrictions eased during the summer of 2020, the demand for in-person tours grew. That finding is counterintuitive: it is seldom the case that when consumers are given a self-serve option, they return to its agent-assisted predecessor. Operators observing this shift in behavior were inclined to view it as a reaction to weeks of shelter-in-place restrictions, where people were starved of human contact.

Another important and consistent finding was the success of virtual tours. Operators were pleasantly surprised at both the success of the "selfie tour" and the creativity that it unleashed in leasing teams. Call centers also yielded some rich and often surprising learnings. One operator reported that their contact center had been busier throughout 2020 but with a smaller than usual call volume.

It seems that as people did more of their shopping online and less of it in person, they had more questions to ask and found value in talking to a human. Call center providers (both operators and vendors) also found that virtual call centers worked well, offering a flexible and cost-effective way of supporting a service delivered by humans.

While leasing associates made something of a comeback in 2021, AI remains an enormously exciting technology for rental housing. What is curious about this year's results is the diversity in the opinions about what this technology has to offer. More interesting still was the difference in views expressed by COOs compared to their technology counterparts.

Operational perspectives mostly fell into two camps: "It's not a priority," or "We are at some stage of evaluating or rolling out a specific AI leasing agent."  The consideration of the technology largely began and ended with the assessment of a specific off-the-shelf product.

IT leaders shared a much broader range of views on AI's potential application to leasing. Some regard the underlying technology as a commodity and wonder whether the skill of training a bot ought to be a core operator competence (rather than IP that should belong to a vendor). Others put another piece of the leasing process (websites, for example) at the center of the leasing process and are looking to AI to bolster that channel rather than provide an alternative. Others still view resident communications as a higher priority and a safer testbed for AI technologies.

We would characterize the overall view of technologists as curious and cautiously enthusiastic. Several shared that the integration of the technology may be more important than the technology itself. To some, "integration" primarily meant interoperability with other key systems. But others were more focused on the part that AI could play in a new concept of a digital customer journey.

In a recent discussion with Paul Marks on his radio show, Multifamily Matters, we talked about the future of leasing in a world where much of the work can be done by robots. We discussed how smart operators are focusing on how to integrate AI into leasing and what that will mean for future operating models. I am convinced that leasing will change far more extensively over the next few years than most people currently realize. Automation—of which AI is part—will be central to these changes. As our interviews told us this year, the opportunity is to offer better customer and associate experiences, and that is an exciting prospect.

Photo by Brett Jordan on Unsplash